By the time I was five years old I was a café hound.

My mother and father met downtown when he came off night shift and went for tea and buns. Sometimes I was lucky enough to join them. Mullaney’s and Finn’s Restaurants being the most popular, though my Da preferred Finn’s.  I loved the clank of cutlery, the clatter of cups and saucers, the buzz of chatter, the waitresses, for they were inevitably waitresses, bustling between tables and the tongue-watering display of cakes, buns, scones and pies all mixed in the heavy, almost spicy aroma of coffee. I loved the women in scarves and hats, the damp wool smell of coats in winter and the clack of toeless high-heeled sandals in summer. And over it all the haze of cigarette smoke. I was forever hooked.

I live in Vancouver, Canada, far away from the cafés of Limerick, Ireland, and am glad that smoking in such establishments is outlawed these days, yet my love of coffee houses remains. I can be found in one, usually Our Town, most days of the week, rain or shine, if you know when and where to look, scribbling in my notebook and listening in to conversations of strangers. 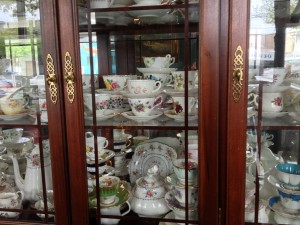 My neighbourhood, Mount Pleasant, is going through the inevitable gentrification pervasive in Vancouver. Still, I was surprised to find a new tea house, Le Petite Cuillere, on the corner of my daily beat as I make my way to my favourite coffee house. It caught my attention first because it has a lovely collection of 1950’s style half-aprons in the window. I hadn’t laid eyes on one in years so I stopped to admire them. The place was not yet open so I had to content myself with peering in the windows.

Because I am a nosy sort, I kept an eye the place. Often it was packed with young women working singly or in groups on laptops, on cell phones, reading books, or simply enjoying each other and chatting up a storm. It was also a hangout for women in their thirties, forties, and up. I have never seen two men sitting in there enjoying a pot of tea and a three tier cake stand piled with scones and delicate cupcakes. This got me to thinking about tea and coffee and space. Is it more manly to drink coffee than tea or is something else going on?  So, of course, I had to pay the teahouse a visit.

The women, and it is women, who run the teahouse, have done a lovely job of creating a cozy space of what is essentially an awkward space. Large, plush easy chairs with little cushions surround round, cloth draped tables. Tea for one comes in small fat teapots,

larger pots for two: real teapots covered in tea cozies that never drip. Light classical music plays at really low-volume. All in all a quiet, peaceful place to spend time. It called to mind an old fashioned drawing-room. I haven’t even thought of the word drawing-room in years, and over my tea and macaroon, I wondered where the word came from.

A drawing-room is, according to the OED, a room in a private house in which guests can be received and entertained. It is an abbreviation of withdrawing-room. Wiki says: Until the mid-twentieth century, after a dinner the ladies of a dinner party withdrew to the drawing room, leaving the gentlemen at table, where the cloth was removed. After an interval of conversation, the gentlemen rejoined the ladies in the drawing room.

So it seems the modern teahouse, reminiscent of an old-fashioned drawing-room, is being used in exactly this way. Women are withdrawing to the teahouse to hold their own discussions and men may, from time to time join them. And they do a mean soy cap too.

A perfect place to linger and chat the afternoon away with a friend over a cuppa and macaroons, it does not entice me to scribble away at my novel. It is too luxurious, too genteel for the drama and angst of my characters. Or perhaps my characters are too modern and rude for drawing-rooms. They fit perfectly in my coffee shop though, among the girls who come in early Sunday morning still dressed in their night before clothes, looking like their heads will explode if someone drops a spoon, and the guys, gallant and embarrassed, with their morning-after girls. Such goings on would never happen in the teahouse, I’m sure of that. 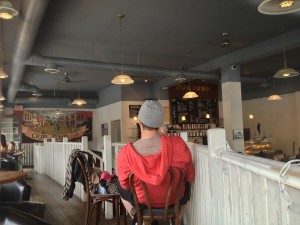 lack of it. It is more about style. For writing time I stick to my coffee house, more inspired with the familiar buzz and bustle of folk coming and going, making out and breaking up, laughing and crying over their lattes, cappuccinos and triple shot Americanos.